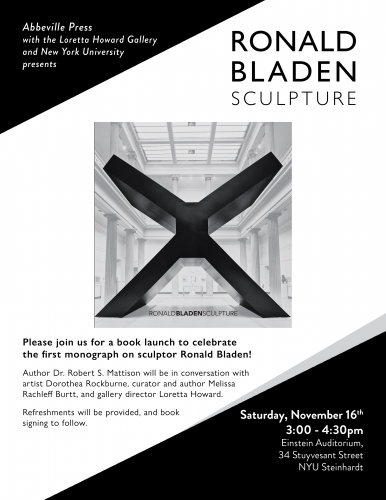 NEW YORK, NY—Abbeville Press is pleased to announce the publication of Ronald Bladen: Sculpture (Hardcover, November 12), the first monograph on a pivotal figure of postwar American art. Ronald Bladen (1918–1988) was regarded as an artistic forerunner by Minimalists like Donald Judd, Sol Lewitt, and Carl Andre. But in contrast to the matter-of-fact work of these artists, Bladen’s sculptures are charged with emotional power. They fill entire rooms, pressing outward against the walls and ceiling; their themes include the force of gravity, the dynamism of planar surfaces, the impact of scale, and confrontation with the viewer.

This splendidly illustrated book presents a comprehensive overview of Bladen's career: his breakthrough works such as Untitled (Three Elements), a standout at the Jewish Museum’s legendary Primary Structures exhibition of 1966; his monumental outdoor commissions of the late 1960s through the 1980s; and his reflective wall reliefs of 1980s. Bladen’s drawings and working models are discussed in detail, and his early career as a painter is considered in the light of his later sculptural oeuvre.

Art historian Robert S. Mattison’s thoughtful analysis of Bladen’s art is informed not only by extensive archival research but also by numerous interviews with Bladen’s contemporaries, including fellow artists like Bill Jensen, Alex Katz, and Dorothea Rockburne. In addition, this volume collects several of the most important critical essays on Bladen, by Irving Sandler, April Kingsley, Bill Berkson, and Naomi Spector. The full scholarly apparatus includes an illustrated chronology of the artist's life and career.

"I like his work because it's pure." —Louise Bourgeois

"[Primary Structures] was the most sensational show since Jasper Johns. . . . [Three Elements] was sold to the Museum of Modern Art. Stylistically he was the number one artist alive." —Alex Katz

"He never made any compromises, and his work possessed a quality of luminous integrity." —Mark di Suvero

"There is a tremendous amount of spirituality there, a sense of a great deal of intelligence." —Ursula von Rydingsvard

"Live in his world for a while and it can change the way you think of yours." —Ugo Rondinone

Today, Bladen's works are in the collections of the Museum of Modern Art, the National Gallery of Art, Storm King Art Center, and the Staatliche Museen zu Berlin, among many others. His grasp of the expressive power of mass and abstract form continues to influence sculptors from Richard Serra to Ursula von Rydingsvard. Here, finally, is a book that reveals and elucidates the full extent of his achievement.